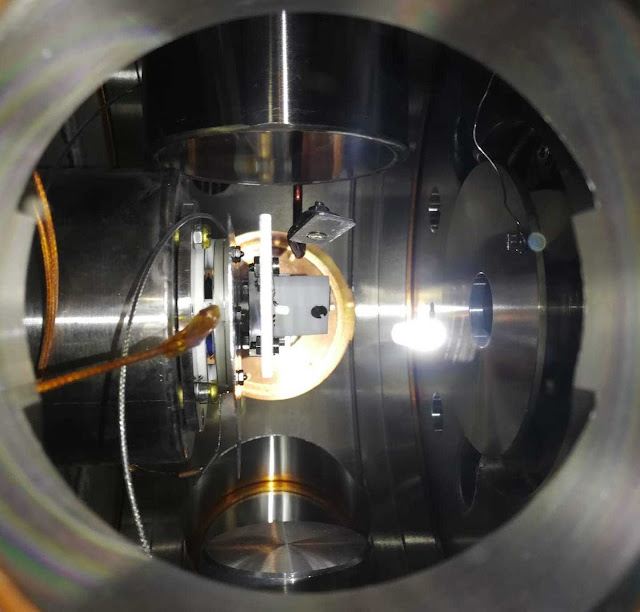 The universe is almost devoid of antimatter, and physicists haven’t yet figured out why. Discovering any slight difference between the behaviour of antimatter and matter in Earth’s gravitational field could shed light on this question. Positronium atoms, which consist of an electron and a positron, are one type of atimatter atoms being considered to test whether antimatter falls at the same rate as matter in Earth’s gravitational field. But they are short-lived, lasting a mere 142 nanoseconds – too little to perform an antimatter gravity experiment. Researchers are therefore actively seeking tricks to make sources of positronium atoms that live longer. In a paper published today in the journal Physical Review A, the AEgIS collaboration at CERN describes a new way of making long-lived positronium.

To be useful for antimatter gravity experiments, a source of positronium atoms needs to produce long-lived atoms in large numbers, and with known velocities that can be controlled and are unaffected by disturbances such as electric and magnetic fields. The new AEgIS source ticks all of these boxes, producing some 80 000 positronium atoms per minute that last 1140 nanoseconds each and have a known velocity (between 70 and 120 kilometres per second) that can be controlled with a high precision (10 kilometres per second).

The trick? Using a special positron-to-positronium converter to produce the atoms and a single flash of ultraviolet laser light that kills two birds with one stone. The laser brings the atoms from the lowest-energy electronic state to a long-lived higher-energy state and can select among all of the atoms only those with a certain velocity.

This is not the first time that researchers have produced a source of long-lived positronium atoms. There are other techniques that do so, including one that involves bringing the atoms to electronic states called Rydberg states, and which could also be used to perform gravity experiments with positronium. But all of these are very sensitive to electric and magnetic fields, which influence the atoms’ velocity and would need to be factored into future gravity measurements. The new method devised by AEgIS is “cleaner”, in that it is almost insensitive to these fields.

The next step on the long path to measuring the effect of gravity on positronium with the new AEgIS source (the AEgIS team and other CERN collaborations mainly plan to take measurements with antihydrogen atoms) will be to confirm that the atoms produced are electrically neutral. CERN’s accelerator complex is currently shut down for a major two-year upgrade programme, so most experiments at the Laboratory, which require a beam of protons, have ceased to operate during this period. An advantage of this positronium experiment is that it doesn’t require protons, so it can continue to be operated during the shutdown.