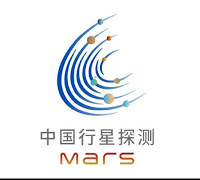 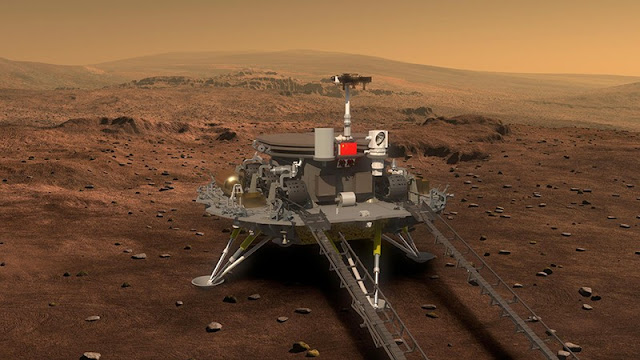 Image above: China’s Mars rover Zhurong has yet to drive off its lander and start exploring. Image Credits: CNSA/Xinhua/Alamy.

Now that they know the general landing location of China’s Zhurong Mars rover, scientists are rushing to analyse satellite images and geological maps to pinpoint intriguing features. Of particular significance is a possible mud volcano — a type of landform that no Mars rover has visited before.

“We want to propose the plan for the rover,” says Xiao Long, a planetary geologist at the China University of Geosciences in Wuhan, who says scientists across China will now have the tantalizing opportunity to influence Zhurong’s journey.

“A number of teams will be trying to plan out the traverse — where you would go in what time frame, to accomplish as many goals as you can in a 90-day mission,” adds Joseph Michalski, a planetary scientist at the University of Hong Kong.

Encased in a lander, the rover touched down shortly after 7 a.m. Beijing time on Saturday, 10 months after China’s Tianwen-1 mission left Earth. Until the touchdown, the potential landing zone — in a vast impact crater called Utopia Planitia — was thousands of kilometres across, meaning that scientists could only loosely finger sites of possible interest.

Zhurong, the Tianwen-1 mission’s rover, transmitted its first images form the southern part of Utopia Planitia, Mars, on 19 May 2021. Tianwen-1 (天问一号) is China’s first Mars exploration mission with an orbiter, a lander and a rover.

Radio signals sent after the rover unfurled its solar panels suggest that it has arrived at the western edge of Utopia Planitia, about 1,800 kilometres northeast of NASA’s Perseverance rover, which landed in February. More precise coordinates will soon come from aerial observations of the site, scientists say. 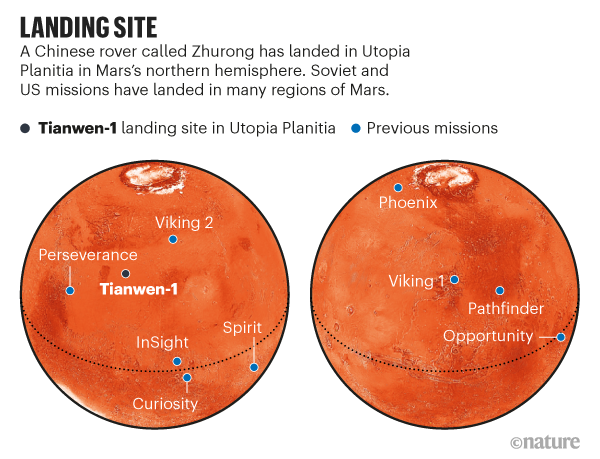 The lander has probably settled on a fairly smooth, sandy plain dotted with small craters, add researchers. They are now studying existing images of the region taken by spacecraft such as NASA’s Mars Odyssey and Mars Reconnaissance Orbiter (MRO).

The site is close to the boundary between Mars’s northern lowlands and southern highlands. NASA’s Curiosity and Perseverance rovers also landed close to this region, which might have been the shoreline for an ancient ocean that once covered the planet’s north. “Many missions want to detect if there is a real shoreline or not,” says Long. 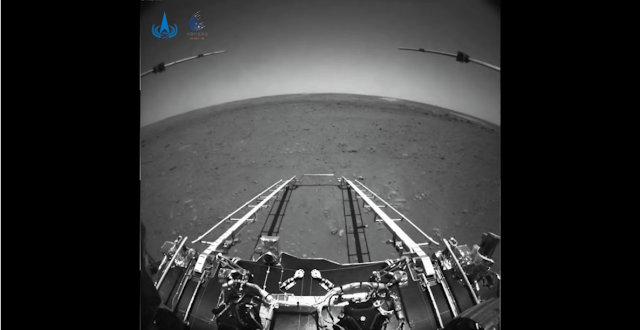 Yuyan Zhao, a planetary geochemist at the Institute of Geochemistry, Chinese Academy of Sciences, in Guiyang, says that her priority is to study the composition of sediments for evidence they have been altered by interaction with water, which would suggest that the area had once been immersed. But Michalski argues that more recent geological processes in the area are likely to have obscured evidence of this ancient water body. 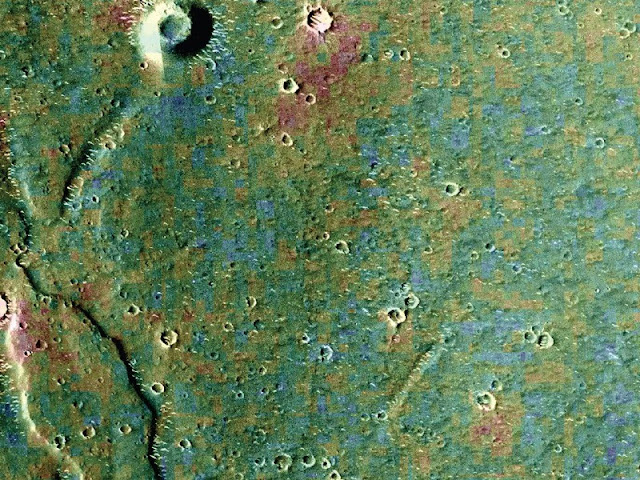 Image above: A false-colour image of Zhurong’s landing site; the image is a composite of ones taken by NASA’s Mars Odyssey and Mars Reconnaissance Orbiter spacecraft. Warmer features, such as rocky surfaces that retain heat at night, appear redder; dusty surfaces, which are cooler, appear blue-green. A conical feature in the top left could be a mud volcano. Image Credits: NASA/ASU.

Of great interest to scientists is a pitted, cone-shaped feature seen in aerial images, which is about three kilometres northwest of Zhurong’s position: this could be a volcano formed from lava or slurries of mud.

On Earth, mud volcanoes are associated with the production of methane by bacteria. Their presence on Mars might help to explain puzzlingly large quantities of methane that had been previously detected in the Martian atmosphere, says Michalski, but “it is a long shot”. 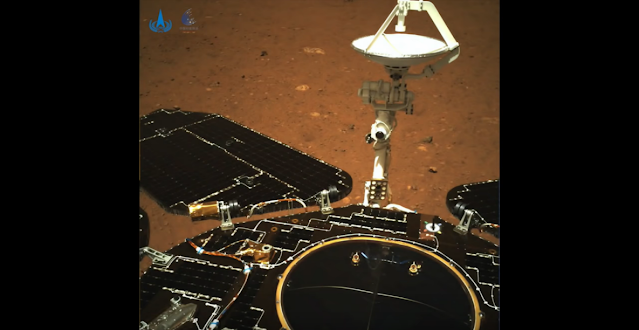 To find out what the feature is, Long says he’d like to see the use of a laser-based system tied to Zhurong’s spectrometer, to zap the rocks and analyse their composition, as well as ground-penetrating radar to study structures below the surface.

Alfred McEwen, a planetary scientist at the University of Arizona in Tucson, and principal investigator for the HiRISE imaging instrument on the MRO, says that the pitted cone would also be “number one” on his list of objects to investigate. But Zhao says that the cone could be beyond Zhurong’s reach. The mission’s goal is to cover a distance of several hundred metres over the next three months, she says — although the rover could stay active for longer.

The area where Zhurong has landed also features large sand dunes that reveal that winds flowed in a southeasterly or northwesterly direction, says Michalski. The site is also likely to contain rocks that were ejected from nearby impact craters, so “there will be a few different rock types to explore”, he says.

Researchers also hope to find ice below the surface. The shallow cliffs and troughs that appear in the aerial images are reminiscent of features seen in permafrost-layered regions of Canada and Siberia, says Michalski — which suggests that features on Mars might also have been formed by ice-driven processes. 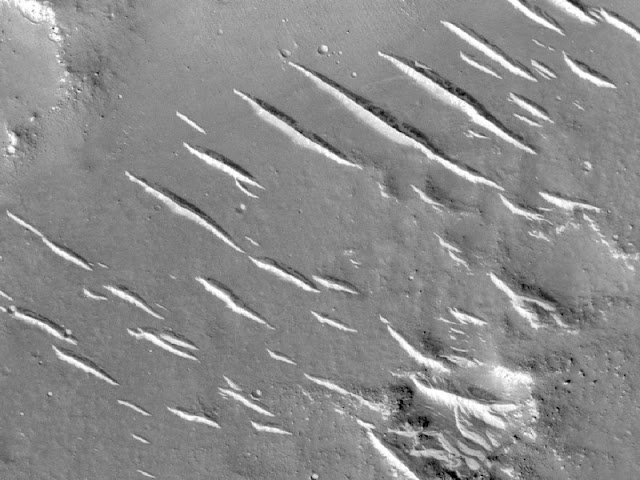 Image above: An image, taken by the Mars Reconnaissance Orbiter, from a region slightly to the southeast of Zhurong’s landing site, featuring ‘yardangs’ — linear ridges made of wind-blown dust. Higher-resolution images of the landing site are required to establish whether such ridges are present there, too. Image Credits: NASA/UA.

In coming days, the CNSA team will check that Zhurong’s instruments are functioning, before driving it down a ramp off the lander.

To explore all these features on Mars’s surface, Zhurong can move at speeds of 200 metres per hour. But it is likely that the 240-kilogram rover will move much more slowly, says David Flannery, an astrobiologist at Queensland University of Technology in Brisbane, Australia, who is part of the team working on Perseverance.

The key challenge will be navigating the complex, rocky landscape autonomously, he says. Even Perseverance — an SUV-sized rover weighing more than a tonne — will probably cover only 100 metres in a day, making it much faster than any other rover before it.

Zhurong landed on Mars! The Tianwen-1 rover is on Utopia Planitia (Videos)
https://orbiterchspacenews.blogspot.com/2021/05/zhurong-landed-on-mars-tianwen-1-rover.html

China succeeds in landing its rover on Mars
https://orbiterchspacenews.blogspot.com/2021/05/china-succeeds-in-landing-its-rover-on.html