The resultant particles quickly spread around the globe, potentially influencing Earth’s climate on an intercontinental scale 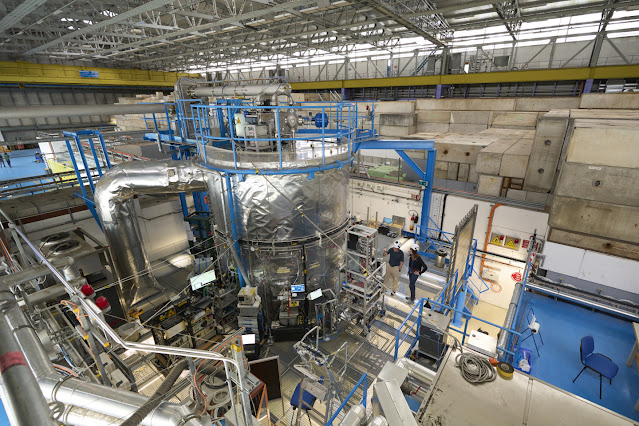 View of the CLOUD experiment at CERN (Image: CERN)

Aerosol particles can form and grow in Earth’s upper troposphere in an unexpected way, reports the CLOUD collaboration in a paper1 published today in Nature. The new mechanism may represent a major source of cloud and ice seed particles in areas of the upper troposphere where ammonia is efficiently transported vertically, such as over the Asian monsoon regions.

Aerosol particles are known to generally cool the climate by reflecting sunlight back into space and by making clouds more reflective. However, how new aerosol particles form in the atmosphere remains relatively poorly known.

“Newly formed aerosol particles are ubiquitous throughout the upper troposphere, but the vapours and mechanisms that drive the formation of these particles are not well understood,” explains CLOUD spokesperson Jasper Kirkby. “With experiments performed under cold upper tropospheric conditions in CERN’s CLOUD chamber, we uncovered a new mechanism for extremely rapid particle formation and growth involving novel mixtures of vapours.”

Using mixtures of sulfuric acid, nitric acid and ammonia vapours in the chamber at atmospheric concentrations, the CLOUD team found that these three compounds form new particles synergistically at rates much faster than those for any combination of two of the compounds. The CLOUD researchers found that the three vapours together form new particles 10–1000 times faster than a sulfuric acid–ammonia mixture, which, from previous CLOUD measurements, was previously considered to be the dominant source of upper tropospheric particles. Once the three-component particles form, they can grow rapidly from the condensation of nitric acid and ammonia alone to sizes where they seed clouds.

Moreover, the CLOUD measurements show that these particles are highly efficient at seeding ice crystals, comparable to desert dust particles, which are thought to be the most widespread and effective ice seeds in the atmosphere. When a supercooled cloud droplet freezes, the resulting ice particle will grow at the expense of any unfrozen droplets nearby, so ice has a major influence on cloud microphysical properties and precipitation.

The CLOUD researchers went on to feed their measurements into global aerosol models that include vertical transport of ammonia by deep convective clouds. The models showed that, although the particles form locally in ammonia-rich regions of the upper troposphere such as over the Asian monsoon regions, they travel from Asia to North America in just three days via the subtropical jet stream, potentially influencing Earth’s climate on an intercontinental scale.

future,” says Kirkby. “Once again, CLOUD is finding that anthropogenic ammonia has a major influence on atmospheric aerosol particles, and our studies are informing policies for future air pollution regulations.”

Atmospheric concentrations of sulfuric acid, nitric acid and ammonia were much lower in the pre-industrial era than they are now, and each is likely to follow different concentration trajectories under future air pollution controls. Ammonia in the upper troposphere originates from livestock and fertiliser emissions – which are unregulated at present – and is carried aloft in convective cloud droplets, which release their ammonia upon freezing.

Image above: Simulation of aerosol particle formation during the Asian monsoon in a global aerosol model with efficient vertical transport of ammonia into the upper troposphere. Including a mixture of sulfuric acid, nitric acid and ammonia enhances upper-tropospheric particle number concentrations over the Asian monsoon region by a factor of 3–5 compared with the same model with only sulfuric acid and ammonia. (Image: CLOUD collaboration).