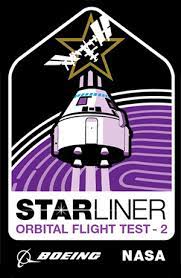 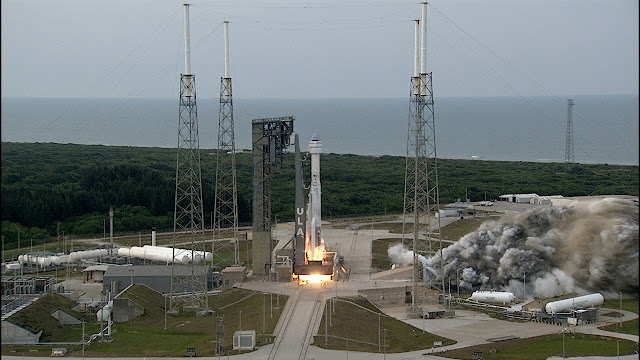 About one minute after launch, the Atlas V rocket achieved Mach 1. About two-and-a-half minutes into flight, a series of key events will begin to occur over the next few minutes. The Atlas V solid rocket boosters will fall away. The Atlas first-stage booster engine will cut off, followed by separation from the dual-engine Centaur second stage. The Centaur first main engine will start, followed by aeroskirt jettison. A few minutes later the Centaur engine will cut off. 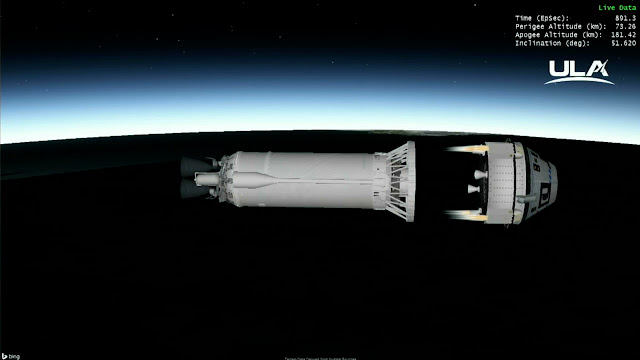 Image above: The Boeing CST-100 Starliner separates from the Atlas V Centaur second stage on May 19, 2022. Photo Credit: NASA.

Boeing’s CST-100 Starliner has separated from the Atlas V Centaur and is flying on its own, embarking on its flight to the International Space Station. After a series of orbital adjustments, Starliner will be on course for rendezvous and docking with the space station at 7:10 p.m. on Friday, May 20.

Boeing’s CST-100 Starliner is in orbit, heading for the International Space Station following launch Thursday of the next-generation spacecraft on a United Launch Alliance (ULA) Atlas V rocket on a mission designed to test the end-to-end capabilities of the crew-capable system as part of NASA’s Commercial Crew Program.

Starliner lifted off on NASA’s Boeing Orbital Flight Test-2 (OFT-2) at 6:54 p.m. EDT from Space Launch Complex-41 at Cape Canaveral Space Force Station in Florida. Following an orbital insertion burn 31 minutes later, Starliner was on its way for a rendezvous and docking with the space station. 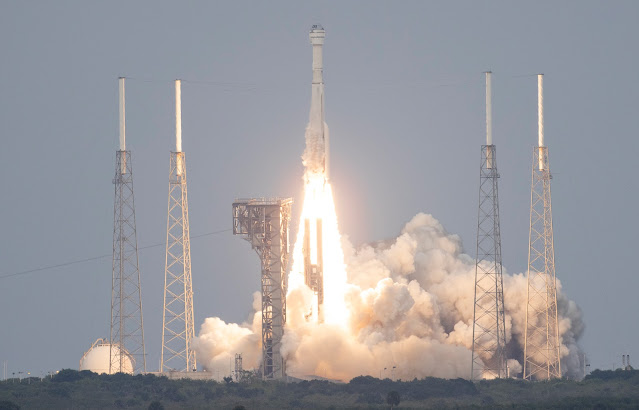 “I am so proud of the NASA, Boeing and United Launch Alliance teams who have worked so hard to see Starliner on its way to the International Space Station,” said NASA Administrator Bill Nelson. “Through adversity, our teams have continued to innovate for the benefit of our nation and all of humanity. I look forward to a successful end-to-end test of the Starliner spacecraft, which will help enable missions with astronauts aboard.”

Launch and orbital insertion are major milestones for the company’s second uncrewed flight, bringing the U.S. closer to having two independent crew systems flying missions to and from the space station.

Starliner is scheduled to dock to the forward port of the station’s Harmony module about 7:10 p.m. Friday, May 20. After a successful docking, the crew of Expedition 67 will open Starliner’s hatch about 11:45 a.m. Saturday, May 21. Coverage of docking and hatch opening will air live on NASA Television, the NASA app, and the agency’s website: http://www.nasa.gov/live

“I am incredibly grateful to our NASA, Boeing, and United Launch Alliance teams that have demonstrated persistence, resolve, and dedication to ensuring we were ready for launch today and for this flight test,” said Kathryn Lueders, NASA associate administrator for space operations at NASA Headquarters in Washington. “We have learned so much as we’ve worked together to prepare for this mission, and we look forward to watching the spacecraft arrive at the space station for the first time and continuing to learn and improve as we prepare to fly our astronauts on Starliner.”

For the flight test, Starliner is carrying about 500 pounds of NASA cargo and crew supplies and more than 300 pounds of Boeing cargo to the International Space Station. Following certification, NASA missions aboard Starliner will carry up to four crew members to the station, enabling the continued expansion of the crew and increasing the amount of science and research that can be performed aboard the orbiting laboratory.

OFT-2 will provide valuable data toward NASA certifying Boeing’s crew transportation system for regular flights with astronauts to and from the space station.

“We’ve learned a lot about the capability of our spacecraft and the resilience of our team since the first Starliner launch,” said Mark Nappi, vice president and program manager, Boeing Commercial Crew Program. “We still have a lot of operational testing ahead as we prepare to rendezvous with the space station, but we’re ready to demonstrate the system we’ve worked so hard on is capable of carrying astronauts to space.”

ULA controlled the launch of the Atlas V rocket from its Atlas Spaceflight Operations Center in Cape Canaveral. As Starliner ascended into space, Boeing commanded the spacecraft from its mission control center at NASA’s Kennedy Space Center in Florida. Boeing and ULA teams also provided support to controllers from Kennedy Space Center and Colorado, respectively, throughout the countdown to launch. NASA teams will monitor space station operations throughout the flight from Mission Control Center at the agency’s Johnson Space Center in Houston.

“We are proud of our partnership role with Boeing in NASA’s Commercial Crew Program and want to thank our mission partners as this is truly a collective accomplishment,” said Tory Bruno, president and CEO, United Launch Alliance. “The successful launch today marks the first critical step toward the future of humans spaceflight onboard an Atlas V and we look forward to the remainder of the mission and to safely flying astronauts in the future.”

Starliner is scheduled to depart the space station Wednesday, May 25, when it will undock and return to Earth, with a desert landing in the western U.S. The spacecraft will return with more than 600 pounds of cargo, including Nitrogen Oxygen Recharge System reusable tanks that provide breathable air to station crew members. The tanks will be refurbished on Earth and sent back to station on a future flight.

What You Need to Know about NASA’s Boeing Orbital Flight Test-2
https://orbiterchspacenews.blogspot.com/2021/07/what-you-need-to-know-about-nasas.html