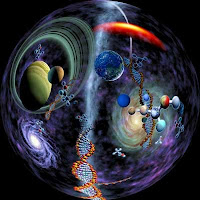 Researchers say a cosmic collision could have created two galaxies that don’t contain the mysterious substance — but others cast doubt on the claim. 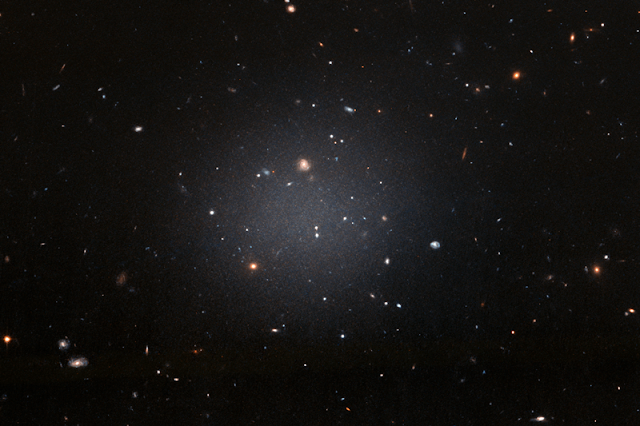 Image above: This Hubble image captures a set of galaxies that are unusual because they seem not to have dark matter. Image Credits: NASA/ESA/P. van Dokkum, Yale Univ.

Astronomers think that galaxies cannot form without the gravitational pull of dark matter. So a trail of galaxies free of this mysterious material, with no obvious cause, would be a remarkable find. In a paper published in Nature on 18 May1, astronomers say they might have observed such a system — a line of 11 galaxies that don’t contain any dark matter, which could all have been created in the same ancient collision. But many of their peers are unconvinced that the claim is much more than a hypothesis.

This kind of system could be used to learn about how galaxies form, and about the nature of dark matter itself. “If proven right, this could certainly be exciting for galaxy formation. However, the jury is still out,” says Chervin Laporte, an astronomer at the University of Barcelona in Spain.

The finding centres on two galaxies described by Pieter van Dokkum at Yale University in New Haven, Connecticut, and his co-authors in 2018 and 2019. Their stars moved so slowly that the pull of dark matter was not needed to explain their orbits, so the team concluded that the galaxies contained no dark matter. The finding was controversial because the galaxies, named DF2 and DF4, seemed stable and different from the only other known dark-matter-free galaxies, which are new and short-lived, created in the arms of larger galaxies whose dark matter is being stripped by a neighbour. How DF2 and DF4 formed was a mystery.

In the latest paper, van Dokkum’s team not only connects the two unusual galaxies, but says their properties are consistent with them being formed in a high-speed collision, eight billion years ago, that also spawned more such structures. “This single explanation explains so many odd things about these galaxies,” says van Dokkum.

Next, the researchers looked for such galaxies in the line between DF2 and DF4. They identified between three and seven new candidates for dark-matter-free galaxies, as well as strange, faint galaxies at either end, which could be the dark matter and stars remaining from the progenitor galaxies. “It was staring you in the face once you knew what to look for,” says van Dokkum.

If this picture proves to be true, it could help astronomers to understand how dark matter behaves, and to learn about the circumstances under which galaxies can form. Such a galactic collision might also be used as a “new laboratory” to understand whether dark matter interacts with itself, says Go Ogiya, an astronomer at Zhejiang University in Hangzhou, China.

Although plausible, van Dokkum’s model describes just one of a number of ways that these galaxies could have been made, says Priyamvada Natarajan, an astrophysicist at Yale who is not a member of van Dokkum’s team. But it is intriguing and, crucially, makes testable predictions, she says.

Measurements of the precise distances and velocities of candidate galaxies could prove they are part of the same string and not just coincidentally along the same line of sight, says Michelle Collins, an astronomer at the University of Surrey in Guildford, UK. “For me, whether this is a real line or not is a big open question.”

Astronomers also need to measure the masses of the ghost galaxies at the ends of the line — the potential progenitor galaxies — to test whether they contain lots of dark matter, as the model predicts, adds Laporte.

Others question whether any exotic explanation is needed. Ignacio Trujillo, an astronomer at the Institute of Astrophysics of the Canary Islands in La Laguna, Spain, leads a team that proposes that DF2 and DF4 are closer to Earth than van Dokkum’s measurements suggest, and therefore contain more dark matter than was at first apparent.

Astronomers also need to see a reliable simulation showing that the scenario van Dokkum’s team describes is plausible, says Mireia Montes, an astronomer at the Space Telescope Science Institute in Baltimore, Maryland. “For now, there are a lot of assumptions, but those are not supported by any simulation,” she says.