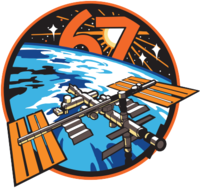 Crew members aboard the International Space Station conducted scientific investigations during the week of May 16 that included examining changes in carotid arteries during spaceflight, demonstrating wireless infrastructure for a wearable health monitoring system, and collecting measurements to track how crew members adapt to life in space. 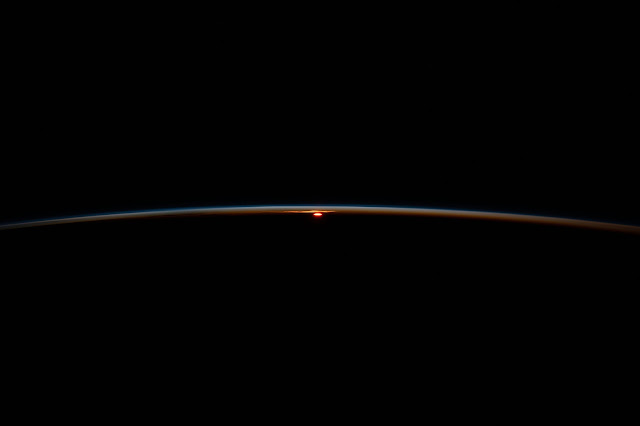 Image above: This image shows an orbital sunset above the Atlantic Ocean off the coast of South Africa as the space station passed 266 miles overhead. Image Credit: NASA.

Here are details on some of the microgravity investigations currently taking place on the orbiting lab:

Keeping an eye on arteries

Vascular Aging, a Canadian Space Agency (CSA) investigation, collects data on vascular changes in astronauts using ultrasound images, blood samples, and wearable sensors. Crew members experience some physical changes similar to aging that occur more quickly in space than they do on Earth. These include changes to carotid arteries, which potentially represent a significant health risk on future long-duration space missions. This investigation could support development of ways to reduce those potential health risks as well as guide prevention measures and treatments for the effects of aging on Earth. During the week, crew members collected multiple data points for the investigation.

Wireless Compose-2, an investigation from ESA (European Space Agency), demonstrates wireless infrastructure for data collection and transmission in microgravity. The investigation includes analysis of how space affects the cardiovascular system, using a shirt with imbedded sensors. This technology could contribute to development of less intrusive ways to monitor the health of astronauts and people on the ground. Wireless Compose-2 also demonstrates hardware that could enable precise control of free-flying robotic systems in environments similar to the space station. This part of the investigation could contribute to technology that provides more precise control of free-flying robots. Crew members conducted sessions wearing the smart shirt during the week.

Standard Measures collects a set of core measurements, including data on behavioral health and performance, cellular profiles and immunology, the microbiome, biochemistry markers, sensorimotor changes, and cardiovascular health. Researchers have collected these data from crew members throughout the life of the space station and use them to characterize how crew members adapt to living and working in space, to monitor countermeasure effectiveness, and to support future research on planetary missions. During the week, crew members collected and processed samples for the investigation. 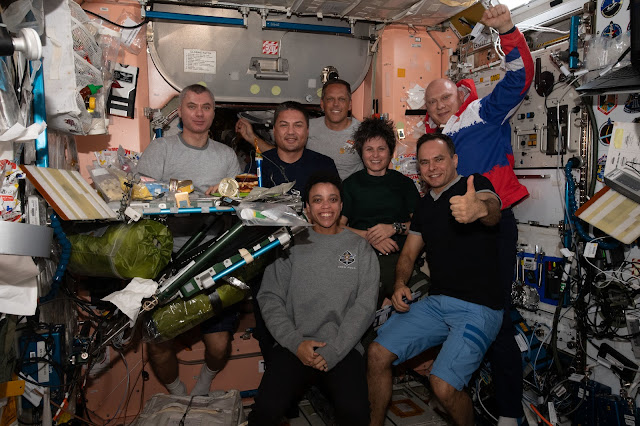 Other investigations involving the crew:

- XROOTS uses hydroponic (liquid-based) and aeroponic (air-based) techniques to grow plants without traditional growth media, which could enable production of crops on a larger scale for future space exploration.
https://www.nasa.gov/mission_pages/station/research/experiments/explorer/Investigation.html?#id=8088

- rHEALTH demonstration tests whether a modified commercial off-the-shelf device can accurately diagnose certain medical conditions in microgravity. Such a device could help crew members monitor their health on future deep-space exploration missions and improve access to diagnostic tests for patients in remote settings on Earth.
https://www.nasa.gov/mission_pages/station/research/experiments/explorer/Investigation.html?#id=8467

- Acoustic Diagnostics, an investigation from ESA (European Space Agency), tests the hearing of crew members before, during, and after flight. While the symptoms of mild hearing impairment can be temporary, it is important to detect them as early as possible before they lead to more significant issues.
https://www.nasa.gov/mission_pages/station/research/experiments/explorer/Investigation.html?#id=7898

- Lumina, an ESA investigation, demonstrates a dosimeter using optical fibers to monitor in real time the radiation dose received by crew members. Monitoring radiation exposure is key to crew safety on future space missions, and this technology also has potential applications in the medical and nuclear industries on Earth.
https://www.nasa.gov/mission_pages/station/research/experiments/explorer/Investigation.html?#id=8444

- ESA’s ANITA-2 demonstrates a device that analyzes trace contaminants in the atmosphere aboard the space station. This monitoring is essential for future human exploration missions and can provide monitoring of air quality in closed environments on Earth as well.
https://www.nasa.gov/mission_pages/station/research/experiments/explorer/Investigation.html?#id=7445

- ISS Ham Radio provides students, teachers, parents, and others the opportunity to communicate with astronauts using amateur radio units. Before a scheduled call, students learn about the station, radio waves, and other topics, and prepare a list of questions on topics they have researched.
https://www.nasa.gov/mission_pages/station/research/experiments/explorer/Investigation.html?#id=337

The space station is a robust microgravity laboratory with a multitude of specialized research facilities and tools. Over more than two decades of continuous operation, it has supported many scientific breakthroughs from investigations spanning every major scientific discipline. The orbiting lab conveys benefits to future space exploration, advances basic and applied research on Earth, and provides a platform for a growing commercial presence in low-Earth orbit.